Now public parkland, 170 acres of the Triangle Ranch Property in unincorporated Los Angeles County adjacent to Agoura Hills was acquired in three phases. A fourth phase acquisition is in the making 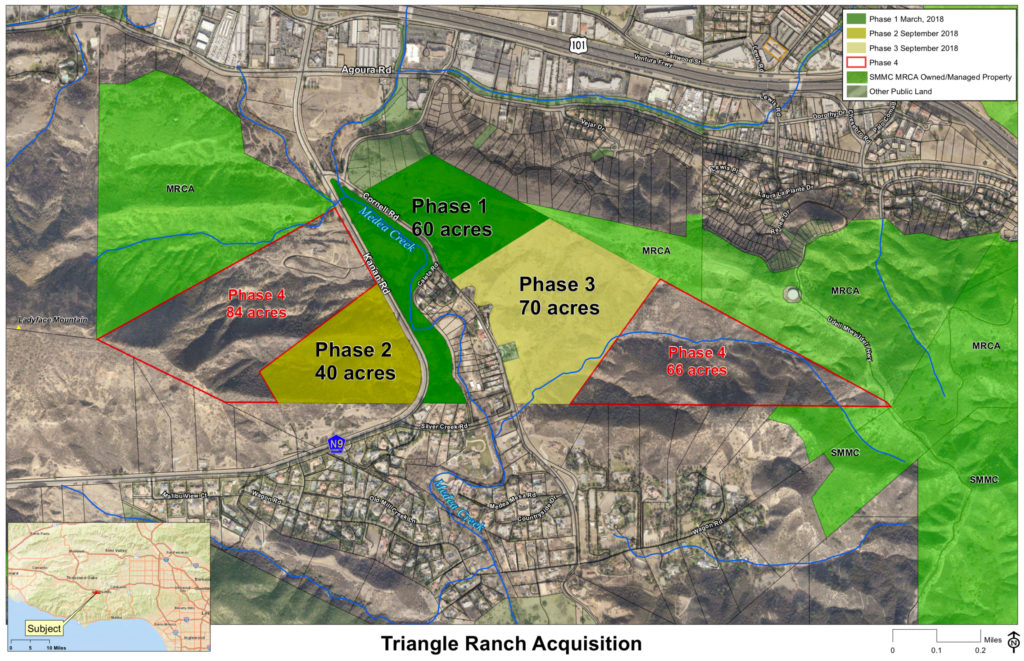 AGOURA HILLS, CA (September 28, 2018) — The Mountains Recreation and Conservation Authority (MRCA) announced today that it had acquired 170 acres of iconic open space in the central Santa Monica Mountains south of the 101 Freeway along Kanan Road. Known for decades as the Triangle Ranch property because of the shape of the land holding, the $16.5 million property was purchased in three phases beginning in March of this year with grants from numerous State and local funding sources including the State Wildlife Conservation Board, the Santa Monica Mountains Conservancy, the County of Los Angeles, the City of Agoura Hills, and the nonprofit Conrad N. Hilton Foundation. The Phase 3, 70-acre acquisition was completed this week.

“The Triangle Ranch project demonstrates how strong partnerships support successful conservation projects,” said John Donnelly, Executive Director, of the California Wildlife Conservation Board, which granted $3,400,000 from the Habitat Conservation Fund for the Phase 3 acquisition. “With our partners, the Santa Monica Mountains Conservancy and the Mountains Recreation and Conservation Authority, we are proud to protect wildlife travel corridors in an increasingly urban environment and provide increased public access opportunities in Los Angeles County.”

Thousands of motorists pass by the now permanently protected parkland each day, which has long been identified as a crucial linkage for habitat preservation, watershed protection, and wildlife movement in the area. The parkland ties the approximately 1,000-acre Ladyface Mountain core habitat area with the Liberty Canyon inter-mountain range wildlife corridor and Malibu Creek State Park. Existing informal trails will be developed to increase public access from Kanan Road.

“This acquisition preserves this irreplaceable landscape and secures wildlife corridors and pathways which animals depend upon for survival,” said Craig Sap, Chairperson of the Santa Monica Mountains Conservancy and California State Parks Angeles District Superintendent. “For now, and forever this land will greet residents and visitors alike with its natural beauty.” The Conservancy contributed a total of more than $9.8 million to all three phases of the acquisition with a combination of grants from Propositions 40, 50, 84, 1 and 68. The new parkland adds to more than 500 contiguous acres of protected open space owned by the Conservancy and the MRCA in this area.

Los Angeles County Supervisor Sheila Kuehl was an early and key supporter of the project, granting $2.5 million in Los Angeles County Proposition A funds towards the acquisition of Phase I. “I am very happy to support this significant expansion of open space at Triangle Ranch because it ensures that this wild and beautiful habitat will be available for the people and animals of LA County to enjoy for generations to come,” said LA County Supervisor Sheila Kuehl.

Negotiations are pending for the final, fourth phase of the project, which includes 150 additional acres. This is anticipated to be completed sometime in 2019.

The Mountains Recreation and Conservation Authority (MRCA) is a local government public entity dedicated to the preservation and management of open space and parkland, watershed lands, trails, and wildlife habitat. The MRCA works in cooperation with other government partners to acquire parkland, participate in vital planning processes, provide natural resources and scientific expertise, and complete major park improvement projects. The MRCA manages and provides ranger services and fire protection for almost 75,000 acres of parkland that it owns and that are owned by the Santa Monica Mountains Conservancy or other agencies and provides comprehensive education and interpretation and leadership programs for youth. It is one of the lead agencies providing for the revitalization of the Los Angeles River.